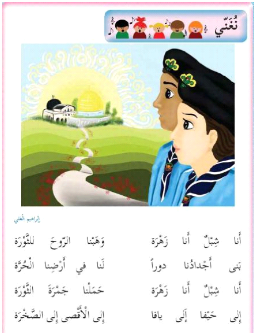 The PA textbooks taught in UNRWA schools (grades 1-10) in Judea, Samaria, East Jerusalem and the Gaza Strip present the city of Haifa, which is located within Israel’s pre-1967 territories, as a Palestinian city:

Another book features a text in which a teacher asks the students to do research on Palestinian cities, and one of the students says that she will ask her grandmother to tell her about the city of Haifa. In that same book a question reads: “We will mention the names of the Palestinian cities that appeared in the text [Gaza, Hebron, Jericho – and Haifa]” (Our Beautiful Language, Grade 2, Part 1 (2016) pp. 114, 115, respectively; (2020) pp. 118, 119). Haifa also appears among the Palestinian cities in another assignment (Mathematics, Grade 2, Part 1 (2016) p. 91)

Both Gaza and Haifa are said to be port cities in Palestine (Geography of the Arab Homeland, Grade 9 (2015) p. 82, and see the assignment on p. 83: “An outline map of the Arab homeland will be distributed to the students upon which I will write the names of the Arab States and mark the ports of Haifa, Aden, Basra, Alexandria and Damam.”)

A lesson titled “Palestinian Cities” discusses in some detail, under the title “the Most Important Palestinian Cities”, a number of cities located in pre-1967 Israel: Haifa, Jaffa, Nazareth, Safed and Beer Sheba. In no place does this piece mention that these cities are now found inside Israeli territory (Geography of Palestine, Grade 7 (2014) pp. 81-85). On the contrary, an assignment on p. 86 specifies: “I will draw a map of Palestine and put on it the most important cities.”

The Palestinian city of Haifa was occupied in 1948, its Arab residents have left it and yearn to come back:

“The teacher will tell a short story about our homeland Palestine: ‘My grandfather used to live in a nice village in [the vicinity of] Haifa. He worked in agriculture, loved the land and guarded it. On one sad day foreign faces came in order to drive my grandfather out of his land, burn the crop and force him to emigrate to distant lands’.” (Teacher’s Guide, Our Beautiful Language, Grade 2, Part 2 [2016] p. 53; Our Beautiful Language, Grade 2 (2018) p. 124)

The Palestinian city of Haifa must be liberated:

The notion of the return of the refugees’ descendants to Haifa while it is still under Israeli rule is presented as sheer lunacy, which makes us understand that it should take place after the elimination of Israel:

Palestinian Authority Minister And PLO Executive Committee Member Majdalani: UNRWA Is The Political Symbol Of The Right Of Return

West Bank and Gaza: State Has Taken Actions to Address Potentially Problematic Textbook Content but Should Improve Its Reporting to Congress