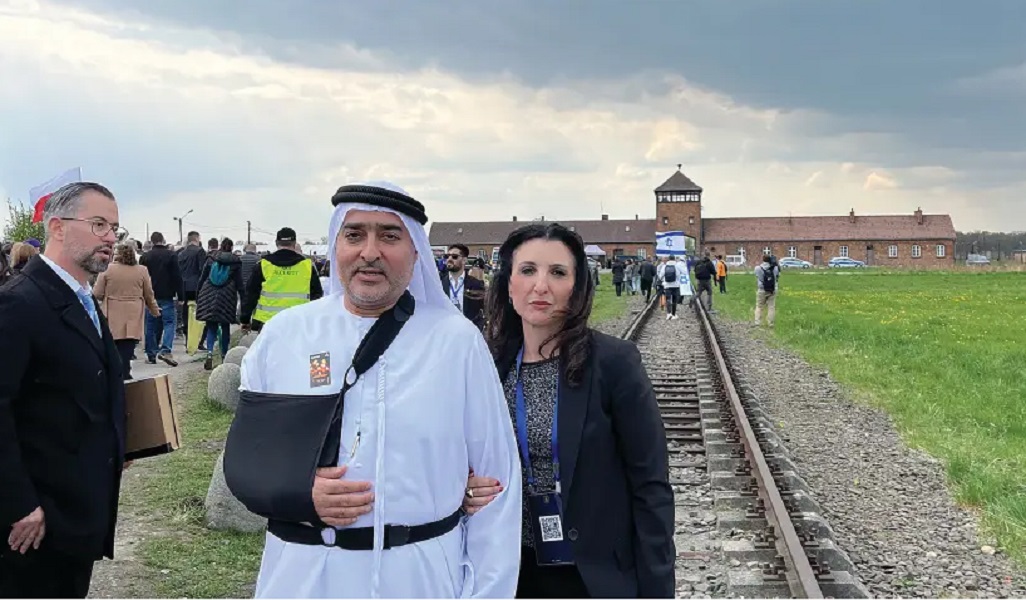 Words have much power, and they are used both on social media and in inciteful textbooks used to teach children.

Three weeks ago, I was given the opportunity to visit Auschwitz-Birkenau for the first time with March of the Living on Holocaust Remembrance Day. As I walked with Jews from the Diaspora and Israel, and Holocaust survivors, I was awakened and frightened by the power of words: the impact they can have on others, and the damage they can cause. Hitler’s ideas grew from words on paper to a full-fledged Holocaust in which six million Jews were methodically killed.

When I returned home to Jerusalem, especially in the lead-up to Jerusalem Day this weekend, I reflected on how words are now being used in my hometown as weapons of incitement.

Today in my beloved Jerusalem, words too often incite, demonize and delegitimize instead of being used as a clarion for peace and tolerance. My time in Poland learning about how words can inspire hatred, which led to the unspeakable horrors of the Shoah, is eerily similar to what I hear from the Palestinian Authority’s mosques, media and education system, which is poisoning the impressionable minds of Palestinian children.

The United Nations Relief and Works Agency, responsible for educating Palestinian children, teaches them that Israelis stole their land and have no right to exist in a Jewish state. UNRWA’s mission has evolved into the demand for the right of return of the descendants of Palestinian refugees in perpetuity, a guarantee of never solving the conflict.

As with everything in the Middle East, if you think you understand an issue, that is a good litmus test that you should step back and reevaluate your preconceived conception. We live in a time where revisionist history, editorialized news and demonization of ideas are accepted if it fits your preconceived narrative.

TEXTBOOKS SAID to be produced by the Palestinian Authority which contain anti-Israel and anti-Western bias are put on display on Capitol Hill by the NGO Palestine Media Watch. (credit: CHIP SOMODEVILLA/GETTY IMAGES/JTA)

The Palestinian Authority and UNRWA provide education for children in east Jerusalem, the West Bank and Gaza. Unfortunately, rather than providing an education that focuses on core subjects needed to succeed in life, the education system is used instead to indoctrinate its young people at the most impressionable ages. It teaches them that their neighbors stole their land, inciting hatred against the State of Israel, the Israeli people and the Jewish people.

HOW SIGNIFICANT is the problem? Over 300,000 children in every school in the West Bank (Judea and Samaria), east Jerusalem and Gaza use these textbooks – even though they do not adhere to the principles of the UN: “promoting peace, tolerance, coexistence and non-violence.”

“ANTISEMITISM, INTOLERANCE – ABSOLUTELY: THESE ARE THE ISSUES IDENTIFIED BY UNRWA.”

According to JNS, The European Parliament passed a resolution targeting UNRWA for teaching “hate speech and violence” in its schools, harshly criticizing the education material that incites and teaches antisemitism. The body has threatened that unless changes are made to the “hate speech, antisemitism and incitement to violence in Palestinian Authority and UNRWA textbooks,” they will end their funding. Unfortunately, in contrast the EU, the body that actually provides the funding refused to condemn or reduce funding to the agency.

Yet UNRWA continues to provide these textbooks that it receives from the PA.

In textbooks published by the UNRWA and the PA, students are indoctrinated to “defend the motherland with blood,” teach that Israelis are “Satan’s aides” and solve math problems using martyrs (i.e. terrorists) who killed innocent Israelis.

The biased education system, coupled with the disinformation and antisemitism shared on social media, creates an atmosphere in which Palestinian children are taught to hate rather than work toward peace and acceptance. Social media is the lifeblood of generation Z.

On TikTok, with over a billion users, there was a 912% increase between February 2020 and May 2021 in antisemitic comments and a 41% increase in antisemitic posts. The Center for Countering Digital Hate found that Facebook failed to remove 89% of posts reported as being antisemitic last year.

SOCIAL MEDIA is a dangerous place where falsehoods spread like wildfire. The power of social media is why we must work to stop the brainwashing of children in the current Palestinian educational system. Between social media and the current PA curriculum, there is very little chance of convincing Palestinian children why peace and co-existence are the best possible outcomes for our communities.

The material taught in schools by the PA and UNRWA has real-life effects on both Israelis and Palestinians as Palestinians turn toward terror. In 2022, eighteen people have lost their lives so far due to terror attacks targeting Israeli citizens.

Two weeks ago, three Israelis lost their lives in a terror attack perpetrated in Elad, leaving behind sixteen children without their fathers. The terror attack was performed by 19- and a 20-year-old Palestinian who grew up near Jenin, going through the PA/UNRWA education system. You can connect the dots where antisemitism also permeates the PA media, the calls from the PA-controlled mosques and the educational system.

Terror and an educational system that fosters it have claimed the lives of 1,396 Israelis since the start of the Second Intifada. Unfortunately, and inaccurately, an Israeli representative – Regional Affairs Minister Issawi Freij – told a UNRWA conference against the Foreign Ministry’s policy of changing the education system that the agency and the PA have already made changes.

Words are more powerful than we often think, and when hateful words are used to teach such young people, it leads to violence that has taken so many lives. The books used to teach young Palestinian children are calls to action, destabilizing the region and providing a roadblock to peace.

It is imperative that despite Freij’s missteps, we Israelis and the international community work to change the PA’s and UNRWA’s education system. Every child deserves the right to an unbiased education, as education should be used to develop a person’s intellectual capacity rather than as a way to push a violent political agenda.

Palestinians: Don’t Believe UNRWA, They Are Not Helping