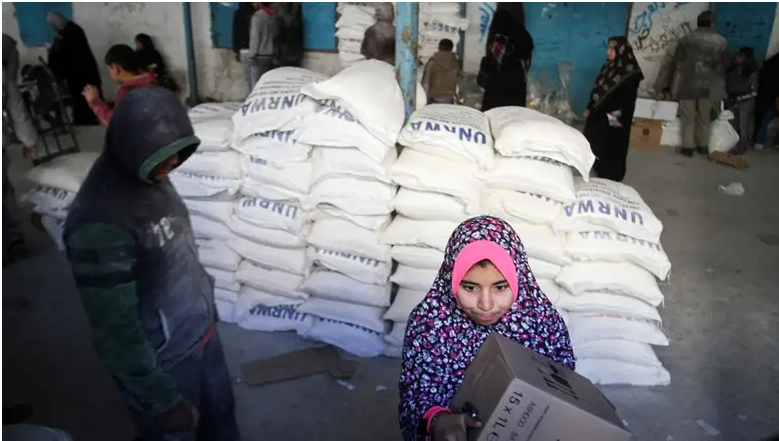 UNRWA paving the road to conflict

The 67 nations and 33 agencies which aid UNWRA do not demand a change in its policies that support the perpetuation of conflict. Op-ed.

When UNWRA (United Nations Relief Work Agency) was formed In December 1949, it was supposed to temporarily tend to the needs of the approximately 600,000 Arab refugees of the Arab-Israeli war of 1948, in refugee camps.

Since the founding of UNRWA, the number of “refugees’ have increased to a staggering 5.7 million according to UNRWA and according to PASI, the Palestinian Academic Society for the Study of International Affairs, that number is 6.7 million. The refugee camps of the past have become cities. In Judea and Samaria, two million of those refugees reside. Other lands include, Jordan, Syria, and Lebanon.

Other than providing aid, there are other agendas of UNRWA.

It appears that UNRWA-run “refugee” camps (aka cities) are perpetuating enmity towards Israel.

-Confrontation with Israel is taught in their schools which have adopted the anti-Israel curriculum of the Palestinian Authority in violation of UN principles of peace and reconciliation.

-UNRWA school textbooks contain many examples of indoctrination against Israel and veneration of terrorists.

-Textbooks omit recognition of Israel school maps omit the existence of Israel. School books exclude any connection between the Jews and the land.

-It also appears that refugees are being primed for combat. UNRWA summer camps actually give young “campers “paramilitary training, preparing for future war with the Jews. The goal is the “right of return”, that is to bring Arab populations to cities and towns like Lod, Ashdod, Jaffa, and Ashkelon, which were populated by Arabs who left or fled in 1948 when Arab armies attacked the newborn Jewish state and whose leaders assured them that they would return to their homes when the Jews were defeated.

UNRWA is an agency, which was supposed to be supervised by donor nations and Israel. That includes managing its school curriculum, which continues to indoctrinate and incite conflict seventy-five years after the establishment of Israel.

The sixty-seven donor nations and thirty-three relief agencies which aid UNWRA and do not demand a change in its policies that support incitement to violence, and the perpetuation of conflict.

The advocacy group UN Watch, enumerated on how teachers in UNRWA schools express support for terrorism and Palestinian terrorist groups, and indoctrinate students to violence. On July 15, 2022, Hillel Neuer, director of UN Watch tweeted that UN Watch has “easily identified 120 UNRWA teachers, school principles and other employees who praise Hitler, glorify terrorist attacks and spread snit-Semitism.” UN Watch decried the, “exploitation of children as child soldiers” as a “form of child abuse and a violation of international law.”

William Deere, the Washington DC, advisor to UNRWA responded that, “UNRWA is an agency fully committed to upholding UN principles and values and has a zero tolerance for hate speech and incitement to discrimination, hostility or violence.”

UNWRA by its actions tells a very different story.

Realizing the extent of incitement in UNRWA schools and summer camps, the Trump administration cut US funding to UNWRA in 2018 for lack of “accountability.” The Biden administration has resumed funding but only under the condition that its education curriculum is for peace.

Israel’s Ambassador to the United States and the UN, Gilad Erdan called for “countries to freeze contributions until UNRWA teachers expressing support terror are fired”. But the funding continues.

In 1967, following Israel’s victory in the Six Day War, when the IDF took control of the Arab populations of Judea and Samaria and Gaza, school textbooks used by Palestinian Arabs rejected Israel’s existence and incited violence. But, then placed under Israeli administration of COGAT,(Coordination of Government Activities in the Territories), new text books were implemented.

However, the signing of the Oslo accords on September 13, 1993, which would give the Palestinian Authority control over education in territories which they administered as a result of the agreements, saw a steady deterioration in the curriculum. Incitement to violence against Israel again abounded in what was supposed to be the beginnings of a process of reconciliation. With the OSLO Accords came the deterioration of UNWRA sponsored institutions, as anti-Israel propaganda proliferated in the territories.

Since Oslo, donor countries have not demanded accountability. Journalist, David Bedein who heads the Israel Resource News Agency and the author of ‘UNRWA Roadblock to Peace’, stated that when he posed the question to thirty-five of the sixty-seven nation which fund UNRWA, as to how they track the funds and where they are going, “they replied that they rely upon the rigorous oversight of UNRWA.”

Today, UNRWA facilities primes tomorrow’s generation for conflict. UNRWA should be seeking real solutions to what was the rejection by Arab nations of the partition of the land in 1947, according to UN resolution 181. Their leaders’ statements denying culpability belies their agenda, which is to allow perpetuation of conflict and the continued hope by Palestinian Arabs to flood Israel with refugees.

Researcher: UNRWA is run by terrorists