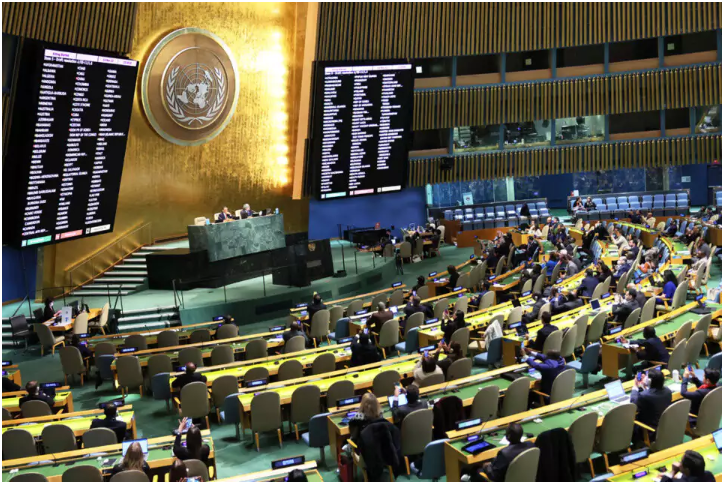 The initiative of the Palestinians: the UN will automatically fund UNRA permanently Israel today

The General Assembly may make an irreversible decision according to which the funding of the refugee agency will come from the UN and not from the donor countries • American official: we do not support the proposal

Israel and the US are working together at the UN to torpedo an initiative by the Palestinians that could change the financing mechanism of the UNRWA agency, which handles the Palestinian “refugees”. According to the Palestinian proposal, the UN will finance UNRWA activities from its budget on a regular basis , instead of donations collected from the countries of the world, as has been done so far.

The cost of UNRWA’s operations is estimated at one and a half billion dollars per year. Unlike the United Nations Refugee Agency, which takes care of the rest of the world’s refugees and rehabilitates them within two generations, UNRWA only takes care of Palestinians and transfers refugee status to the fifth generation of Arabs who fled the country during the War of Independence. At the time of its establishment, it treated half a million people, while today it already has 5 million.

Since 1949, the agency has managed refugee camps and operates educational institutions in East Jerusalem, Yosh, Gaza, Jordan and Lebanon. The great majority of its employees are local Palestinians, some of whom have been discovered over the years to have ties to terrorism. Only recently, UNRWA once again reported on a terrorist tunnel that was discovered in one of the houses The book is in Gaza.

The agency reported the discovery late and refuses to this day to indicate the location of the tunnel.

A threat to transparency

The idea of ​​assigning UNRWA funding to the UN is intended to spare the heads of the agency the need to explain to the donor countries the problematic aspects of its functioning.

Only last week, UNRWA was criticized by Oliver Warehly, one of the European Union’s top officials, due to the exposure of the terrorist tunnel. In addition, many countries, including the United States and the United Arab Emirates, have reduced or stopped their support for UNRWA in recent years. In most cases, the reason is Revelations about the incitement to terrorism taught in UNRA schools.

In Israel, they are worried that the budgeting of UNRWA by the United Nations will be irreversible, since the decision requires the approval of the General Assembly. In this forum there is an automatic majority against Israel, so once the decision is passed, it will not be possible to return the situation to the way it was before.

A situation in which the UN finances it is less good for us, among other things because it will perpetuate the refugee problem,” says a political source.

Human rights activist David Badin, who has been investigating UNRWA’s activities for 35 years, told Israel Hayom that the proposal is problematic. It will pass in the General Assembly and the refugee status is passed from generation to generation among the Palestinians, the meaning is that what is called the ‘refugee problem’ will remain with us forever.”

the US allowances to UNRA.

Different from the days of Trump

Unlike the previous administration, in which in 2018 President Trump canceled US allowances for UNRWA, the current Biden administration is not going out of its way at this stage to stop the move, but is not enthusiastic about it either.

This is what a US State Department official told Israel Hayom: “We will continue our voluntary contributions to support the Palestinian people through UNRWA. The US remains the largest donor to UNRWA. In 2022, the US provided almost 344 million A dollar to UNRA, including critical support for health and social services for the benefit of millions of Palestinians.”

We will fix it!

If you found an error in the article, we would appreciate it if you shared it with us