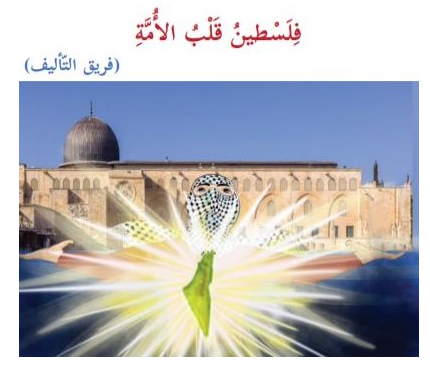 Revealing Maps: The Palestinian Vision as Taught in UNRWA Schools

The present research deals with some 115 maps of the country appearing in the latest edition of schoolbooks issued by the Palestinian Authority in 2020 (few books were issued earlier and have not been revised since then) and used in UNRWA schools. Its source material included 125 books of grades 1-10 in the subjects of Arabic, English, Social Studies (including Geography and History), Islamic Education, Mathematics, Sciences and Technology.

The research aimed at checking the way this country – Israel/Palestine – is presented, in view of the ongoing conflict between the two nations that claim to be its owners. The basic hypothesis of this research was that the two parties see this country in its entirety as their homeland, which should be expressed in the maps appearing in their respective schoolbooks. In order to substantiate this hypothesis, two Israeli geography textbooks were examined too. They were officially licensed by the Israeli Ministry of Education and were issued by the Israeli Center of Educational Technology (CET), which is considered a central publisher of schoolbooks in Israel.

Indeed, there were found in the Israeli textbooks maps that present the country as one unit with no internal boundaries under the name “Israel” when those maps were not of political character. The following example is a map titled “Soils in Israel”, which also includes the territories of Judea, Samaria and Gaza (as well as the Golan Heights that was placed under Israeli legal jurisdiction in 1981).

A parallel phenomenon is found in the Palestinian maps as well. Following is a map titled “Physical Map of Palestine”:

Other Israeli maps express the fact that the territories of Judea and Samaria have not been annexed by Israel (except for East Jerusalem) and the Gaza Strip has become a territory with no Israeli presence there whatsoever since 2005. These are mostly maps that carry an administrative character as they exclude these areas from Israel’s territory using the expression of “[a region with] no data”. Following is a map titled “Population Density in Israel according to Sub-Districts”:

Among the Palestinian maps in use in UNRWA schools, on the other hand, there are only few maps that show the contours of these areas. In the following example, the map does not say specifically what is found beyond them:

Another map treats the Israeli Negev region as part of Palesti beyond the contours of Judea, Samaria and Gaza:

A third map titled “Palestine after the 1948 War” says specifically in its legend what is the area beyond these areas:

[Purple] Territories taken over by the Zionists following the war”

And back to the Israeli maps. The current political reality is described there as is, with the Palestinian Authority’s territories designated as area A, and sometimes its B territories as well, are clearly shown. It should be noted, though, that the PA is not a sovereign political body – even though it has been recognized by the UN as a non-member observer state. According to the Oslo Accords, by which the PA was established and which are still in force, it is an autonomous administrative body under the suzerainty of the Israeli Defense Force, which, in its turn, is subject to the jurisdiction of the Israeli government. Following are two Israeli maps. The first one presents areas A (colored dark brown), and the second one shows areas A (dark brown) and B (light brown):

In total contrast to these Israeli maps (as well as many others in books examined by the author of this research), there is not even one map in the entire corpus of maps in use in UNRWA schools today that shows the State of Israel. Even in clearly political maps the whole country appears under the name “Palestine” only. Thus, Israel, a recognized sovereign state which has been a member of the UN organization since 1949, is erased from the maps used by UNRWA, an official UN agency!

The first map among the ones in the following examples, titled “Map of Palestine and the Levant”, presents the four states in the Levant region under the names: Syria, Lebanon, Jordan and Palestine:

The second example is taken from an English textbook. The map, untitled, presents the region’s states by their names with no additional details. Here again Palestine replaces Israel:

Another map, titled “Map of Palestine”, gives the names of the neighboring states:

The exclusively Palestinian character of the country as a whole is emphasized in the following example. A map titled “Map of the Arab Homeland” presents the Arab states with their names. The name “Palestine” appears next to the country in its entirety (colored in red) with the Palestinian flag above it:

This map appears in the textbook within the framework of Lesson 2 titled: “Palestine is Arab and Muslim”:

The exclusive Palestinian ownership of the country is emphasized within an exercise in which the student is requested to color the country’s map with the colors of the Palestinian flag:

“The second lesson: I am drawing my country

Preparatory activity: The shape of my country

And another example. The inscription next to it says: “Together we shall protect the homeland”:

Palestine’s exclusive appearance on the country’s map is also seen in a product sold to tourists which depicts the country’s map colored with the Palestinian flag’s colors, alongside the name “Palestine” in Arabic and English. Following is an example given in another textbook:

If Israel’s pre-1967 territory is an occupied one, as indicated in map No. 6, then, it should be liberated. The struggle for this goal is hinted in the following illustration that presents the map of the whole country against the background of Al-Aqsa Mosque and a veiled face of what might be regarded as a member of a terrorist organization, under the title “Palestine is the heart of the nation”:

In this context, cities within Israel’s pre-1967 territory where Arabs live, or used to live, are considered Palestinian cities – even if the majority of the population there is Jewish:

“6. I will indicate on a silent map of Palestine the following Palestinian cities:

Acre, Haifa, Gaza, Jericho, Jerusalem, Nablus, Safed, Beer Sheba, Hebron, Rafah.” It should be noted that the bold-lettered names are those of cities inside pre-1967 Israel (including western Jerusalem) and their population is mostly Jewish.

The next example, titled “Palestinian cities”:

“Activity 3: We will look at the map below and then will accomplish the following [requirements]:

We will give examples of Palestinian cities:

-In the hinterland mountains

-Cities located in the Jordan Valley

-Cities located in the desert region”

On the map, titled “Map of Palestine” appear the following cities: Acre, Safed, Haifa, Tiberias, Nazareth, Jaffa, Beer Sheba – all are Israeli cities before 1967, as well as Nablus, Ramallah, Jerusalem (of which the western part was Israeli before 1967), Bethlehem, Hebron, Gaza and Rafah.

Apart from ignoring the existence of Israel as a sovereign state, having presented its entire territory as occupied – with the implied notion that it should be liberated, there is total non-recognition in the maps used in UNRWA school of the Jews who live in this country and who number today some seven million people. That non-recognition is expressed by the total absence from the map of cities established by Jews in modern times, chiefly Tel Aviv. The message is clear: Jews are foreign to Palestine and they have no legitimate place there. Following is one example out of many: The cities appearing on the map – Safed, Tiberias, Nazareth ,Acre, Beisan (today’s Beit She’an), Umm al-Fahm (declare officially as a city under Israeli rule), Jenin, Tubas, Tulkarm, Nablus, Qalqilyah, Jaffa, Lydda, Ramleh, Ramallah, Jericho, Jerusalem, Bethlehem, Hebron, Gaza, Beer Sheba. The missing cities: Tel Aviv, Holon, Bat Yam, Ramat Gan, Beney Berak, Petah Tikvah, Herzliya, Netanya, Hadera, Afula, Upper Nazareth (lately renamed Nof Hagalil), Kiryat Shmona, kiryat Gat, Beit Shemesh, Dimona, Ofakim, Shderot, Netivot, Karmiel, The Krayot near Haifa, and many others.

Two exceptions are cities established by Jews which appear on the map under the Arabic names of the desolate places where they were later built: Eilat (Umm al-Rashrash) – several times (see maps Nos. 11, 18 above) and Hadera (Al-Khudaira) – once (Mathematics, Grade 4, Part 1 (2020) p. 86).

Israeli maps, by contrast, usually show central cities such as Nablus, Hebron and Gaza in the areas of Judea, Samaria and the Gaza Strip (and see maps Nos. 1, 3, 7, 8 above).

Hiding the Jewish presence in the country in schoolbooks used by UNRWA finds its expression in the historical context as well. Following is a text accompanying the map of this country and its surroundings in an English textbook. The text, titled “About Palestine”, refrains from mentioning the country’s Jewish past:

In conclusion, a simple comparison between the maps in UNRWA’s schoolbooks and their Israeli counterparts provides us with one conclusion: The Israeli maps reflect the existing reality, while the Palestinian maps used by UNRWA express the Palestinian vision. In that vision Israel does not exist, the whole country is under Palestinian sovereignty, the seven million Jews who live in Israel “disappear” – with their cities and their ancient history there, and the way of realizing this vision is by struggle. That struggle is explicitly mentioned in texts examined in former research studies and is hinted here as well (see map No. 16 above).

There is no way of justifying the use of these maps by a UN agency that is committed to the principles of respecting the sovereignty of each member state of the UN organization – including the State of Israel, total neutrality vis-à-vis the parties to the conflict, and the resolution of that conflict peacefully according to UN resolutions. The use of these maps by UNRWA betrays a gross disrespect of these three principles and the donor states should act vigorously in order to change this dismal situation.

Jews in Palestinian Authorities Schoolbooks in UNRWA Use

US Conditions UNWRA and PA Funding. About Time! with David Bedein (June 10 2021)