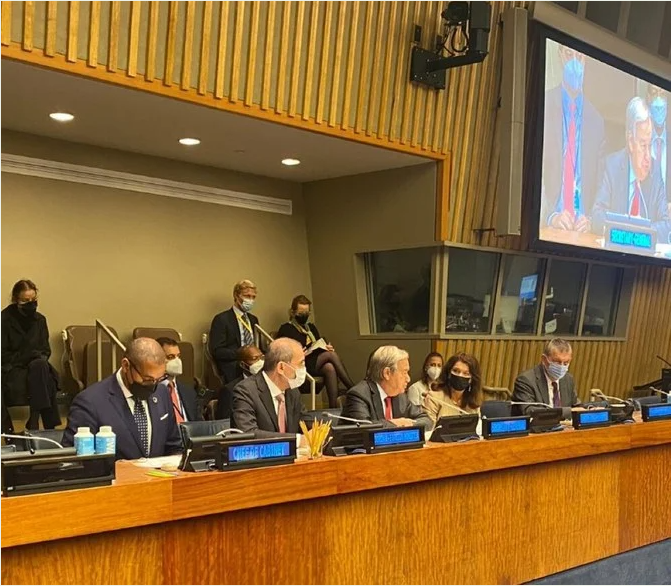 AMMAN: Jordan and Sweden have co-chaired a ministerial meeting focused on developing policies and strategies to ensure the sustainability of financing the UN Relief and Works Agency’s programs.

Jordan’s deputy prime minister and minister of foreign affairs and expatriates, Ayman Safadi, together with Sweden’s Foreign Minister Ann Linde, chaired Thursday’s ministerial meeting to support UNRWA, with the participation of UN Secretary-General Antonio Guterres, reported the Jordan News Agency.
UNRWA’s Commissioner-General Philippe Lazzarini, foreign ministers and representatives of 40 countries and international organizations attended the meeting that discussed the best sustainable means to finance the agency’s programs to enable it to provide vital services to Palestinian refugees, said a ministry statement published by Jordan News Agency.
The meeting further discussed mobilizing support for the vote in the UN General Assembly to renew UNRWA’s mandate next December.
Guterres stressed the important role of UNRWA in enhancing stability in the Middle East, calling for adequate funding for the agency. He noted that the organization still needs more than $100 million.
He said without its vital services, there would be no education for children or shelter for families.
He added that support for UNRWA is a moral responsibility, and that any disruption of its work would lead to increased frustration and provide terrorist organizations with a fertile environment for recruitment.
Safadi said the agency’s role is an important factor for stability in the region, and stressed the need to continue to implement its international mandate.
He also emphasized the importance of the international community to provide political and financial support to UNRWA so that “it can continue to provide its vital services to the refugees.”
Safadi highlighted Jordan’s continued work with Sweden and international partners to provide the support the agency needs.
He also stressed the need to work on developing policies, strategies and a predictable budget through a three-year funding scheme that would enable UNRWA to fund its program from the UN’s regular budget.
Safadi said the agency must continue to provide its services until the refugee issue is resolved in accordance with international law.
He added that this should happen in the context of a comprehensive settlement based on the two-state solution that embodies the establishment of an independent, sovereign Palestinian state with occupied Jerusalem as its capital, living side by side with Israel in peace and security.
Linde said the meeting confirmed the international community’s willingness to support UNRWA and its basic role, stressing the importance of providing sustainable and stable financial support to the agency.
Lazzarini spoke about the challenges facing the agency and its financial deficit, the plan for coming years, and efforts to provide necessary support for it.

UNRWA Commissioner-General Calls for Three-Year Mandate to be Renewed