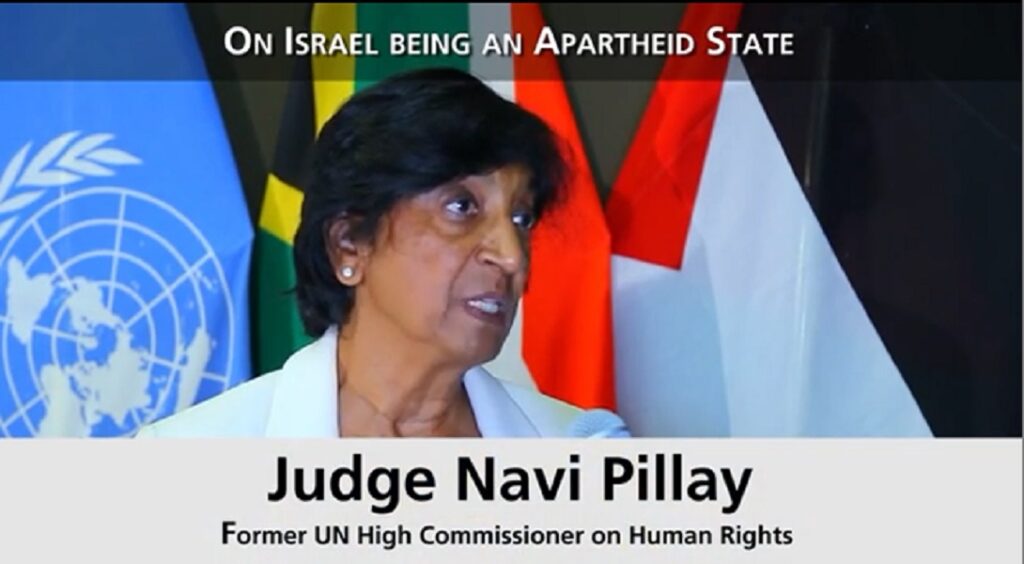 Head of UN Probe on Israel Accused of Prejudice, Watchdog Calls on Her to Resign

The head of a new United Nations inquiry into last spring’s Hamas-Israel war was accused today of making prejudicial statements on the issues under investigation, compromising her impartiality, and was asked to recuse herself in a legal brief filed today with the UN by a Geneva watchdog group, which has also launched an online petition.

According to the 30-page complaint submitted today by UN Watch, an independent non-governmental organization that monitors the world body, Navi Pillay, a retired South African judge and former UN human rights chief, violated UN rules by failing to disclose numerous of her prior statements that directly prejudge the matters before the inquiry.

“Many of the utterances in question occurred mere weeks before she was appointed by the UN this summer, leaving little room to imagine how Pillay could envisage the issues any differently so soon afterwards,” said Hillel Neuer, Executive Director of UN Watch and an international human rights lawyer.

In a June 14, 2021 joint letter to U.S. President Joe Biden, Pillay decried Israel’s “domination and oppression of the Palestinian people,” calling on the U.S. to “address the root causes of the violence” by ending Israel’s “ever-expanding discrimination and systemic oppression.”

Meanwhile, a key focus of the UN inquiry headed by Pillay is the examination of “root causes of current tensions” between Israelis and Palestinians, including alleged “systematic discrimination.”

In her letter to Biden, Pillay further wrote that the April clashes at Al Aqsa in Jerusalem—also to be examined by the inquiry—constituted “aggressive actions by Israeli forces” against “peaceful protesters and worshippers,” which amounted to “forced dispossession of Palestinians,” the “latest evidence of a separate and unequal governing system.”

According to Neuer, “it is astonishing that the United Nations appointed an individual as the supposedly impartial chair of an inquiry immediately after she declared one of the parties guilty in the very controversies that are at issue in the investigation.”

“By heading this inquiry despite having repeatedly declared Israel guilty of precisely the crimes that she is supposed to investigate, Navi Pillay embodies the injustice of the UN and its human rights council when it comes to the selective treatment of the Jewish state,” said Neuer.

While the inquiry is mandated to examine “systematic discrimination” on the basis of race, ethnicity or national origin, in June 2020 Navi Pillay signed a petition, organized by the South African Boycott Divestment and Sanctions (SA BDS) Coalition, entitled “Sanction Apartheid Israel!”

In a May 2021 lecture, Pillay described Israel’s treatment of the Palestinians as “inhuman.” She compared Israel to apartheid South Africa, and defended the systematic singling-out of Israel under a targeted agenda item at the UN Human Rights Council.

“Apartheid is now being declared a crime against humanity in the Rome Statute, and it means the enforced segregation of people on racial lines, and that is what is happening in Israel,” said Pillay in November 2017.

On May 31, 2010, while serving as UN High Commissioner for Human Rights, Pillay declared that “the Israeli Government treats international law with perpetual disdain.”

“Never throughout her UN tenure did Pillay use such dismissive language regarding any other country—not even against serial abusers such as China, Russia, Iran, Syria or North Korea,” said Neuer.

“From her statements, it is clear that in Pillay’s eyes, Israel is a cruel and oppressive colonizer, and a racist regime. Her narrative of who is the villain is set in stone. Ms. Pillay has long ago made up her mind.”

“Asking Navi Pillay to head an inquiry examining Israel is like asking a vegetarian to review a steakhouse,” said Neuer. “When it comes to Israel, as our legal brief demonstrates, Pillay is the complete opposite of impartial.”

“The legal test is the appearance of bias, and there’s no doubt that Pillay fails the test. We are therefore calling on her to do the right thing, and to resign immediately.”

In contrast to UN Secretary-General Ban Ki-moon and her predecessor High Commissioner Louise Arbour, who had both criticized the UNHRC for its notorious agenda item targeting Israel, Navi Pillay stood out by repeatedly trying to defend this discrimination, in remarks made for example in Italy, Kuwait and South Africa.

In 2009, Pillay headed the UN’s follow-up to the 2001 Durban conference on racism, an event tainted by unprecedented displays of antisemitism.

When Jewish community activists around the world sounded the alarm, Pillay repeatedly demonized them at the UN and in the media as “lobby groups” that were “focused on single issues.”

Neuer said that Pillay needs to consider the principles she was sworn to uphold.

“We are calling on Ms. Pillay, as a former UN human rights chief, to respect the impartiality obligations set forth in the UN Declaration on Fact-Finding, the impartiality guidelines published by her former office, and her own solemn undertaking that she recently gave, on becoming chair of the inquiry, to be impartial.”

“As a former judge on international tribunals, Ms. Pillay must know that their precedents clearly disqualify a judge who had made prior, partisan statements declaring the culpability of one of the parties.”

“it is frankly impossible to imagine how Navi Pillay could lead an impartial investigation into the events of April-May 2021, as well as into alleged systematic discrimination, given what she has already declared on all of these. A reasonable person would consider Navi Pillay to be partial, thereby disqualifying her from serving as a member of the inquiry.”

“If the United Nations and its Human Rights Council are to live up to their founding principles of universality, impartiality, objectivity and non-selectivity, then Navi Pillay cannot be a member, much less the chair, of this Commission of Inquiry.”

“Accordingly, today we are calling on Ms. Pillay to recuse herself. In the event that she refuses to do so, we request Federico Villegas, the President of the Human Rights Council, to remove her.

The commission of inquiry was created at a May 27, 2021 session initiated by the Palestinians together with Pakistan on behalf of the Islamic states. No Western democracy voted for the inquiry, which is unique because its term has no end.

The report of the 3-person probe is to be presented in June 2022 in Geneva. The UN budgeted a record amount of several million dollars for the inquiry, which is expected to hire more than 20 staff to prepare their first report.

Is UNRWA USA using the death of an Islamic Jihad terrorist to raise funds? – israel365news.com