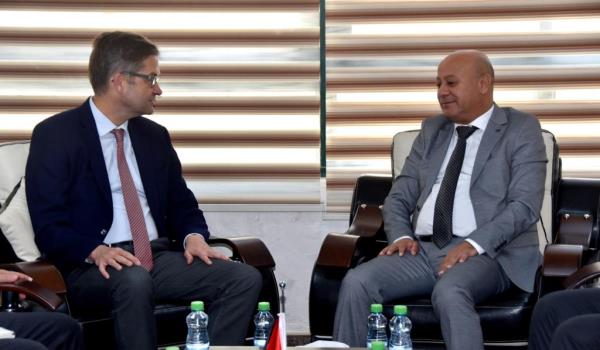 Dr. Abu Holi Discusses With The German Ambassador The Conditions Of Refugees In The Camps

Dr. Abu Holi, confirmed during his meeting with the German ambassador, that German support enabled UNRWA to continue its basic programs and services to 6.6 million Palestinian refugees, pointing out that German support for UNRWA’s regular and emergency budget amounted to $158 million in 2022, making it the second funder of UNRWA after the United States.

He pointed out that the German government is a major and important supporter of UNRWA, stressing that the additional fund for emergency programs in the Gaza Strip, Lebanon and Jordan, through the signing of three agreements worth $36 million, has contributed to alleviating the living conditions of the poorest families headed by women, and will also contribute to alleviating poverty and unemployment. Especially since part of this money was allocated to run the money for work program.

Dr. Abu Holi gave the German ambassador an explanation of the difficult living conditions of the refugees in the Palestinian camps in light of the deteriorating economic conditions and the inability of UNRWA to meet their growing needs due to its financial crisis, He also showed the danger that threatens the two-state solution with the Israeli extremist right-wing parties assuming power in Israel in light of Israel’s continued denial of international efforts to revive the peace process and its continued violation of international law.

Abu Houli said:’ extremist Israeli right-wing took over the reins of government in Israel headed by Netanyahu, who carry the slogan of apartheid, dismantling the institutions of the Palestinian National Authority, and annexing areas classified (C) represent a threat to two-state solution’.

PLO Executive Committee member thanked, the German government for their permanent and continuous political support for the Palestinian cause and their continued economic support for building Palestinian state institutions and its commitment of supporting the two-state solution and reviving negotiations between the Palestinians and the Israeli side under the auspices of the International Quartet or a multilateral framework.

Dr. Abu Holi thanked, the German Agency for Development (GIZ) efforts and supports , which has a real partnership with the Refugee Affairs Department in the implementation of projects of priority and importance in the Palestinian camps, expressing his hope to strengthen and expand the partnership through financing a series of vital projects for the Palestinian camps of priority and need for refugees that contribute to strengthening and Enabling refugees to overcome their difficult living conditions, in a way that does not conflict with UNRWA’s powers and tasks.

For his part, Oliver Owcza the German ambassador affirmed that his government supports the two-state solution and rejects unilateral steps and settlements as illegal and in violation of international law and United Nations resolutions, pointing out that his country’s government is waiting for the Israeli government’s work and its dealings with the Palestinians to judge its policies and its commitment to international legitimacy.

Ambassador Owcza said:“We will work to convey the conditions of the Palestinians and their suffering, as well as the conditions of the refugees in the camps, to the German government and parliament, in a way that enhances the clarity of the German government’s vision on the importance of continuous German support for UNRWA and the Palestinian refugees in the absence of a political solution to their issue for 74 years.”

The meeting were attended by from Palestinian side,Refugee Affairs Department
Undersecretary Anwar Hamam, Public Relations Director Manal Qassem, and Central Camps Director Muhammad Elayan, and from the German side, it was also attended by Mutasim Al-Ashhab, Political Affairs Counselor at the German Embassy.

Legal Disclaimer:
MENAFN provides the information “as is” without warranty of any kind. We do not accept any responsibility or liability for the accuracy, content, images, videos, licenses, completeness, legality, or reliability of the information contained in this article. If you have any complaints or copyright issues related to this article, kindly contact the provider above.

US must hold runaway UN agency accountable for its actions