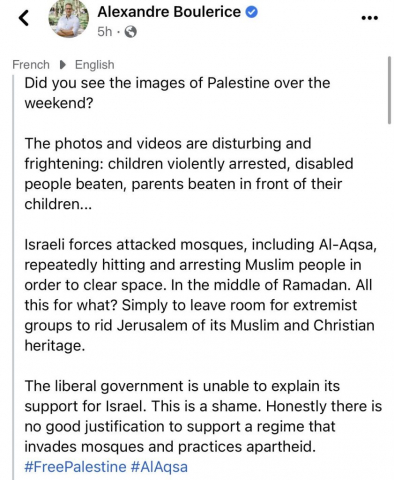 Deputy Leader of the Canadian Federal NDP has posted biased, antisemitic message about the riots on the Temple Mount

Alexandre Boulerice is the Deputy Leader of the NDP and an MP from  Quebec and below is his original Facebook post in French and the English Translation, followed by a letter from CAEF to the Leader of the Party, Hon Jagmeet Singh. The letter was headed: How Many Lies Can One NDP Member Squeeze Into a Facebook Post?==================

Dear Mister Singh,Let’s count the lies issued by Alexandre Boulerice, as it is quite incredible that in 2022, your Deputy Leader could get it so wrong and would dare to repeat age old antisemitic lies about Israel and the Jewish people. It is your responsibility to address this asap and to renounce the  lies, discipline your member and publicly admonish him, take down the post and try to heal the damage.I will recount the lies in this translated version of his posting (shown below):

Mr. Singh, it is well time that you held an educational session for all your members, for your MPs and staff, to teach the truth, eliminate Jew hatred which this posting reveals. Stop allowing horrendous, antisemitic lies against the Jewish state to define your party!

SIRHAN WAS AN ‘UNAFFILIATED’ TERRORIST