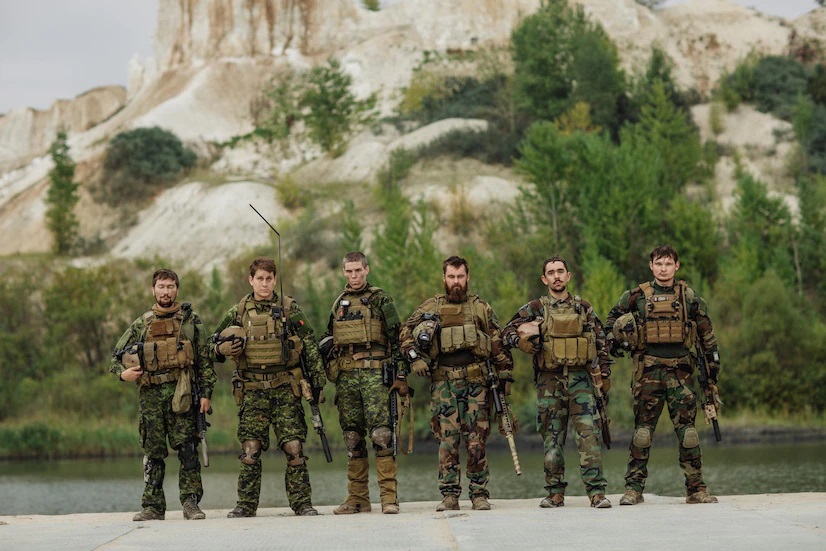 Our new weekly feature: Behind the Scene with David Bedein

In July, riots were perpetrated by masked men in the Hebron region, located in Area C of Judea, an area under Israeli sovereignty. Were these riots perpetrated by Jews? Was the violence orchestrated by anarchists to create a provocation?

Well, no one knows.

What is newsworthy is that Canadian military personnel, in uniform, appeared at the scene of the riots, and launched their own investigation, interviewing Arab villages in the area to hear what they had to say. These villagers had squatted on lands that the Israel Civil Administration, in charge of the area, has not authorized.

Brigadier General Steve Graham of the Canadian Armed Forces and other members of a Canadian military delegation were also spotted visiting a cluster of unauthorized Arab homes on Israeli state land within the municipal lines of the Jewish community of Maon in the South Hebron Hills area.

After journalists made queries about this with the Canadian Embassy in Israel, the Embassy responded:

“In 2005, the US established the Office of the United States Security Coordinator (USSC) for Israel and the Palestinian Authority. Through a military task force based in Jerusalem, Canada contributes to the USSC under Operation PROTEUS. The purpose of Operation PROTEUS is to help the Palestinian Authority Security Forces (PASF) build their capacity.”

Brigadier-General Graham recently ended his mission, and passed command to a younger officer. Graham’s replacement was also documented visiting illegal Palestinian outposts in Area C. On July 28, Meir Deutsch, Director of the Regavim organization, an Israel land advocacy group, filed a complaint with the Canadian government representative’s office, asking why uniformed Canadian army personnel would patrol an area under Israel sovereignty without an escort from the IDF, which Regavim described as a “violation of Israeli and international law by a foreign military force.”

Since July, unauthorized unformed Canadian army personnel have been spotted making timely visits in Arab villages located in the Hebron region, not coordinated with the Israel Civil Administration. Canadian diplomats located in Tel Aviv and Al Birah, near Ramallah, will no longer say anything to the media about this. Neither will the Israel Civil Administration respond to questions from the press about this development.

This remains an issue for policy makers in Ottawa to address.

Canadians did much of the field work for the Americans, who were  restricted by U.S. law from operating in Judea and Samaria and much of Jerusalem. While American liason officers to the A were based in Jerusalem, the Canadian contingent was located in Ramallah.

Today, things have gotten complicated.  Several of the US and Canadian trained PSF groups are now openly in armed confrontation with Jews- namely, The Al Aqsa Brigades, an integral part of the PSF, have been taking credit for random attacks launched against Jewish civilians and military personnel alike.

Hello Ottawa and Washington: Anybody Home?

An update to the PAY TO SLAY law, enacted by the Palestinian Authority in August 2015.

That law, which you can see on the web site, IsraelBehindTheNews.com under the title “incentifying terror”, provides an automatic fee for life for anyone who murders a Jew and pays the family of the killer if he dies in the act of killing  Jews.

Unsubstantiated rumors have it that the PA will no longer act in accordance with PA law and no longer pay for killers.

However, in preparation for this article, The Nahum Bedein Center asked its correspondent in Ramallah to contact the press office of PA leader Machmud Abbas, to ask if the PA would continue to pay those who kill Jews and pay the families of the killers.

The answer from the Abbas press spokesman was not long in coming: “Of course that PA law remains in force. Do you think we would give any favors to Netanyahu at this time?”

Support Proactive News Investigations for Israel run by the Nahum Bedein Center For Near East Policy Research. Nahum z”l was the brother of the Center director, David Bedein.

Canadian tax deductible donations for the Center can be sent through  CAEF, Canadian Antisemitism Education Foundation at https://tinyurl.com/4bdpf8nv

Confronting Germany with the Indiscretions of UNRWA

Policy briefing to congress staff personal about UNRWA – May 11, 2021