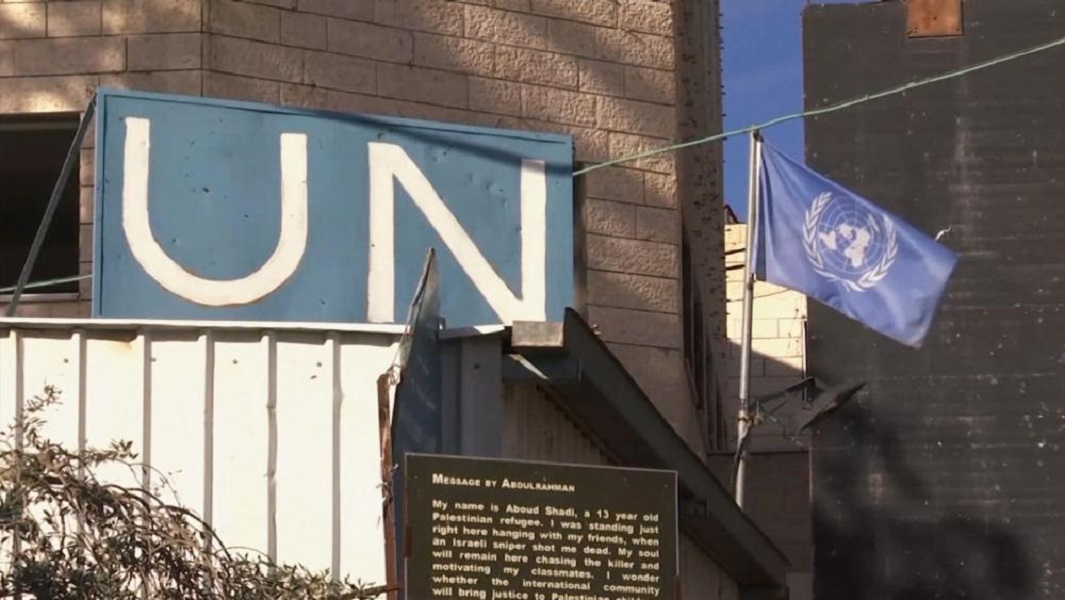 Once again, anti-Semitic teaching material was found at the United Nations Palestinian Relief Agency – even though the organization had promised to fix this problem.

Meanwhile, a film on French-speaking Swiss television is white washing the SRcretary General of UNRWA, Pierre Krähenbühl, whoi resigned in disgrace. portraying him as the victim of an Israeli-American intrigue. What makes the relief organization so problematic is hardly mentioned.

A few days ago, the Israeli organization, the Institute for Monitoring Peace and Cultural Tolerance in School Education, published an explosive report. It states that the United Nations relief agency for Palestinian refugees, UNRWA, has produced worksheets for schoolchildren who stir up hatred of Jews and Israel. The facility operates around 370 schools in the Gaza Strip, the West Bank and East Jerusalem and teaches around 320,000 children and young people there. Basically, she uses the textbooks of the Palestinian Authority, which have long been criticized for their anti-Semitic and violence-glorifying content.

However, the aid organization has now distributed its own supplementary work materials to the students, who should use them for homeschooling in subjects such as Arabic, English and social sciences during the corona pandemic. These include, for example, so-called flash cards. IMPACT-se has evaluated the documents and has come to the conclusion that they too are “permeated with hatred and encouragement to jihad, violence and martyrdom”. The material produced by UNRWA is “in places more extremist than the material from the Palestinian Authority that it supplements”. Israel does not exist on maps, in other places the Jewish state is only mentioned as a “Zionist occupier”.

In addition, there are often positive references to jihad, for example in sentences such as “We will defend the motherland with our blood”, “The Palestinians are lions in the fight against the enemy” or “Jihad is one of the doors to paradise”. In the meantime UNRWA has responded: Its Secretary General Philippe Lazzarini wrote on Twitter that there was “no place for discrimination and calls for hatred and violence in UNRWA schools”. After references to “inappropriate pages from school books that were accidentally distributed during the Covid 19 lockdown”, these were “replaced by content that corresponds to the values of the United Nations”. What exactly this new material looks like, he did not say; He also left it open as to how UNRWA intends to collect the documents in question.

This new find is extremely embarrassing for the aid organization, after it had previously given assurance that it would make extensive efforts to ensure the quality and balance of the teaching.

Since it f has no mandate to change the curricula and textbooks of the countries in which there are UNRWA schools, it has developed supplementary teaching and learning materials and set up programs for further training for teachers.

The Swiss Federal Council had recently allowed itself to be appeased by these assurances; Switzerland’s financial aid to UNRWA will therefore continue to the same extent as before, after it has been suspended in the meantime.

The UNRWA is particularly concerned with image cultivation after it has been in the headlines more and more frequently in recent years: because some of its schools were used by Hamas as a rocket depot, because the terrorist organization uses the aid organization for its activities, because the UNRWA teaching staff is anti-Semitic on Facebook Propaganda spread because pupils in UNRWA educational institutions are educated to hate Jews and are supposed to internalize jihad as a perspective on life. The USA, for many years the most important donor, therefore cut its financial support massively and finally canceled it entirely.

When there was also an internal UN investigation against Secretary General Pierre Krähenbühl and other leading UNRWA officials on suspicion of abuse of power, nepotism and corruption, and several countries, including Switzerland, also canceled their payments to the aid organization, its crisis worsened .

In the investigation report, no fraud or embezzlement of donations by Krähenbühl was found; However, it said there are management problems that need to be addressed. The general secretary finally resigned. A film by Anne-Frédérique Widmann and Xavier Nicol for French-speaking Swiss television recently took on the extensive rehabilitation of Krähenbühl and tried to polish up the reputation of UNRWA in the process. The tenor of the film is: Pierre Krähenbühl, who has always stood up for the Palestinian refugees with heart and soul, has become the victim of an intrigue by Donald Trump and Benjamin Netanyahu, who were supported by the Swiss Foreign Minister Ignazio Cassis. Because Krähenbühl succeeded in plugging the financial holes and ensuring the continued existence of UNRWA against the will of Israel and the United States, he had to be brought down, his integrity being seriously questioned.

Advertisment for Krähenbühl and UNRWA

Widmann and Nicol work primarily with the medium of the interview and also with excerpts from speeches. Krähenbühl himself plays the main role, with Carlo Sommaruga, SP Councilor of States and supporter of the BDS movement, the Geneva university professor Riccardo Bocco, who has worked for UNRWA, and Kenneth Roth, the notoriously anti-Israeli executive director of Human Rights Watch, at his side. Critical voices, who have a much smaller voice, include David Bedein, journalist and head of the Bedein Center for Near East Policy Research in Jerusalem, Lex Takkenberg, the former head of the UNRWA ethics office, and the political scientist and former Knesset MP Einat Wilf.

Anne-Frédérique Widmann had apparently originally arranged an interview with Hillel Neuer, the director of the UN-critical organization UN Watch, but then canceled it, according to a statement by UN Watch. In a research, the Geneva-based organization shows that Widmann shares caricatures on social networks with consent, among other things, demonizing Israel, making accusations of apartheid against the Jewish state and defending UNRWA against criticism. This attitude is also reflected in the film, even if Widmann only rarely comments or classifies something there. But the level of detail in which Krähenbühl has his say and the montage of approving or supportive statements from other interviewees make for the appropriate impression.

The ex-Secretary General of UNRWA appears as someone who, during his tenure in office, has always defied all adversities and injustices under the most difficult of conditions – war in the Gaza Strip, pressure from Israel and the USA, serious funding cuts that resulted in layoffs, and finally internal investigations fought. And who would not find it heartbreaking that Krähenbühl promised a 13-year-old Palestinian schoolgirl that she would take her notebook, which UNRWA found in the rubble of a destroyed school in Gaza, on his international travels – and then show it to Barack Obama, among others ? Given the pictures of schools in ruins, who would not be outraged that the Israeli army was shooting at them?

Criticism of UNRWA is dismissed

That Hamas deposited rockets in UNRWA schools, that it fired them from there at Israel, that its members and supporters provide some of the teaching staff, that it holds memorial ceremonies for its “martyrs” in schools – all of this is in the film If it comes up at all, just a side note. The links between Hamas and UNRWA are only mentioned in a brief statement by the Israeli UN Ambassador Danny Danon at a meeting of the Security Council that the Gaza-connected Pierre Krähenbühl sharply rejected. Regarding the rockets stored in the schools, he said: «It was we who found them. We informed the world about it and we condemned the fact that they were placed there. ” As if the problem didn’t go much further and as if it were all done with a quick reply.

The important and essential criticism of the anti-Semitic and terrorism-glorifying teaching content expressed by David Bedein, in turn, can be dismissed by Krahenbühl in succinct sentences: “Every year UNRWA checks the content of the textbooks to determine whether there are parts that are problematic in terms of neutrality and political or other sensitivities. This is a subject that is important, but it is being used endlessly and in a distorted way to pressure UNRWA on a subject that I think the organization is very good at. ” There is no follow-up, there are no other votes either, so the matter is settled for Widmann and Nicol.

They focus on the internal UN investigation against Krähenbühl and the final report, which he said he never saw while it was before Anne-Frédérique Widmann. Many of the original allegations made by UNRWA staff to Lex Takkenberg, and which he summarized in the film, were not confirmed; These misconduct remained: “Pierre Krähenbühl approved the appointment of his deputy husband’s husband and failed to remove his chief of staff from the selection committee. He appointed a director already in office without going through a recruitment process. [His personal assistant] Maria Mohammedi was recruited by Krähenbühl on a tender basis, although he knew that she had made a film in 2013 without UNRWA permission. Mohammedi flew business class eight times, a trip that Pierre Krähenbühl made her pay for with his miles. Pierre Krähenbühl then changed the internal rules so that one person could travel with them. ”

Riccardo Bocco thinks it is “ridiculous”, while Carlo Sommaruga says: “That means there is nothing.” The “goal of discrediting Krähenbühl” had nonetheless been achieved. Krähenbühl himself believes “that we have not been forgiven for having managed to overcome the cut in American funds”. The film underpins this assumption by portraying Trump and his Middle East envoy Jared Kushner and Netanyahu as ruthless politicians who wanted to shut down the good UNRWA in order to realize their agenda in the Middle East – especially through statements by Sommaruga, Bocco and Roth. The Swiss Foreign Minister Cassis supported them in this, also by accepting Kushner’s assessment that UNRWA was “part of the problem and not the solution”.

It is not that Widmann and Nicol do not allow critical voices to have their say. But these are demeaned in the midst of their clear endeavor to white wash Pierre Krähenbühl clean and to bathe the Palestinian Relief Organization in a mild light. Anti-Semitism and the glorification of terror in schools, the connections to Hamas, the fundamental problem of the supposed right of return and the inheritance of refugee status to this day, the completely one-sided, anti-Israeli orientation of UNRWA – none of this is an issue or completely irrelevant. These fundamental aspects are of the greatest importance and far more important than questions about possible personal misconduct. But the film is gratefully picked up in the Swiss media, and its narrative is continued there, for example in the Lucerne newspaper. There it is now said that Secretary of State Cassis is an appendage of the US administration under Trump. Or in the SRF radio show “Echo der Zeit”, where it is claimed: “The USA and Israel wanted the head of Krähenbühl, who was extremely successful as a fundraiser. And they got him. ” As if there were no serious substantive reasons for a fundamental criticism of UNRWA that went beyond individual misconduct.