A big showdown is brewing on Israel’s border with the Gaza Strip.

Weekend riots turned deadly, and now Israel’s military may enter Gaza to stop Hamas terrorists from stoking more violence that some predict could continue for the next six weeks.

Israeli Defense Minister Avigdor Lieberman has warned that Israel may have no choice but to enter the Gaza Strip if Hamas continues to promote and expand violent protests.

The Israeli Defense Forces will also not rescind the policy of using live fire in the aftermath of protests that led to 17 deaths and hundreds of injuries during a “March to Return” demonstration at the Israeli border with Gaza.

An estimated 30,000 protesters showed up for what was billed as a peaceful march. Salah Abdeldati, Palestinian on the legal committee for the March to Return, claimed Israel is responsible for the violence.

“We have organize[d] and will continue to organize cultural, social and sporting activities to distract the [Gaza] youths from confronting the occupation soldiers,” Abdeldati said. “But as you see, the soldiers keep provoking the protesters to drag them into a circle of violence.”

But news video and video from the Israeli military showed protesters hurling rocks and Molotov cocktails at Israeli security forces and rolling burning tires at them. 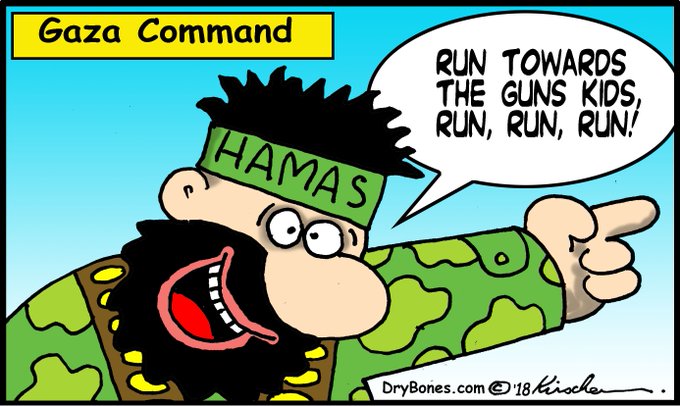 While much of the world is blaming Israel for the violence, Israeli leaders say Hamas will resort to anything, including the use of women and children as human shields, in its war against their nation.

Israeli Defense Forces video shows a seven-year-old girl being prodded across the border presumably to goad Israelis into shooting. The military said the girl was returned to her parents.

Author and journalist David Bedein of the Center for Near East Policy Research has documented the Palestinian fight against Israel for decades.

He told CBN News that Hamas and other Palestinian groups seek more than just a public relations victory in Gaza. He accused UNRWA, the United Nations Relief and Works Agency, of funding and promoting the cause of Hamas through schools subsidized by western nations, including the United States.

Of the current protests he said, “This is the first stage, which will last for six weeks and for the next six weeks all the schools of the country, not only in Gaza, also in Judea and Samaria and Jerusalem, will be having programs to promote the Right of Return March on May 15th, when the children will be commanded to take back the homes the children lost, or their grandparents lost, in 1948.”

Bedein contends it’s no accident that the protest coincides with Israel’s 70th anniversary and with the Trump Administration’s plan to move the US Embassy from Tel Aviv to Jerusalem in May.

He’s concerned that Israelis haven’t come to terms with what might follow the current wave of demonstrations for the Arab demand that they return not just to Judea and Samaria {the West Bank}, but to all of the cities and villages where Arabs lived before Israel’s 1948 independence declaration.

“Stage two will be much more massive, much more aggressive and much more lethal in certain respects,” Bedein explained. “No one is ready for this, and I keep asking the people in the Israeli army, are you ready for children coming at you with guns?  And there’s no preparation for that.”

BLM and the poison of anti-Semitism

YouTube Enhances Hatred of Israel and Extinguishes Hate for Palestinians