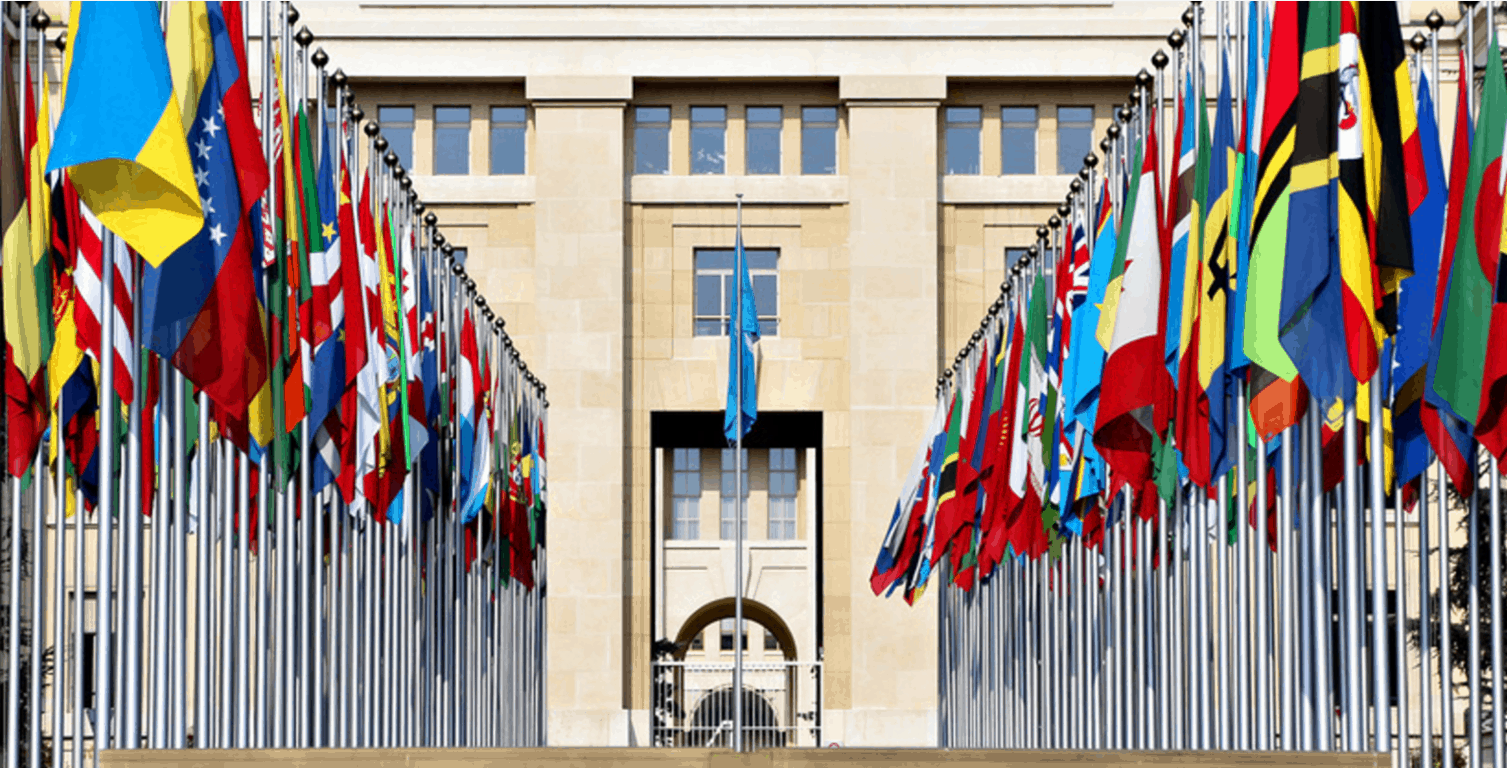 One did not need to possess a crystal ball or read tea leaves in order to predict that 2023 would commence with Israel being targeted by the usual motley collection of serial international hypocrites.

In years to come, when the United Nations as currently constituted has been consigned to the dustbin of history, we or at least the next generation, will be able to pinpoint exactly when the rot set in.

The old League of Nations died as a result of the democracies’ refusal to stand up to the bullying and stand-over tactics employed by the dictatorial nations of the day. This same discredited script is being followed now, as every week, the UN and its associated bodies convulse with endless condemnations, investigations, denunciations and delegitimisations of the Jewish State.

The latest decision of the UN General Assembly to refer Israel to the International Court at The Hague raises some questions which need addressing. Hopefully, the new Israeli Government will waste no time in making it clear that the days of sweeping inconvenient facts under the carpet are now over. Moreover, something more potent than outraged rhetoric is called for.

It should be obvious that a concerted campaign has been launched to stigmatise and target Israel. Having failed to eliminate us by force of arms, the anti-Israel plotters now employ a far easier strategy. This is diplomatic terror aided and abetted by a combination of regimes of the most dubious kind and democracies with a dubious track record of refusal to stand up to anti-Jewish targeting. With an inbuilt majority at the UN, our misnamed “peace partners” and their willing partners can confidently rely on passing each and every resolution regardless of its fictional content.

Those nations which voted in favour of this travesty exemplify yet again the enduring nature of blind hate for the world’s sole Jewish State. Just as shameful are those countries that could not summon up the political moral will to vote against this resolution and preferred instead to sit on the fence. By not wishing to side with the moral minority, these abstainers merely pretended that they did not want to become involved. This brings to mind all those in Nazi-occupied Europe who preferred to avert their eyes at what was happening to their Jewish neighbours and abstained from taking any positive action.

To its credit, Australia once again voted against this latest UN-sanctioned pogrom, while New Zealand predictably preferred to avoid any responsibility and joined the abstainers.

This farce will, of course, be a long-running one, and we can expect further dramas as the year unfolds.

As I am writing these lines, another eruption of uncontrollable convulsions has taken place.

One of the falsehoods and blatant lies propagated by President for life Abbas, which has been swallowed by the international community, revolves around Har Habayit (the Temple Mount). Much like Shoah’s denial, the effort to deny any Jewish connection with this site despite archaeological evidence to the contrary has taken root in the collective minds of many.

In addition, the libel of a Jewish plot to rebuild the Third Temple on the ruins of the Al Aqsa Mosque is inculcated via PA school textbooks and media so that the masses are now brainwashed into believing this malicious fable.

Add into this toxic mix the veneration of a latter-day so-called “status quo” with Abdullah of Jordan as the holy anointed guardian of Islamic and Christian holy sites, and you get a totally distorted picture of reality.

Not only are these myths and distortions of history warping the truth as far as individuals are concerned, but they have also become the gospels of NGOs and the United Nations.

I am mentioning all these factors because they have yet again featured in this week’s latest round of condemnations and self-righteous indignation.

The new Israeli Minister of National Security, described in every media release as “a right-wing extremist” decided that on the Fast of the 10th of Tevet (i.e. Tuesday of this week) he would visit the Temple Mount. The Kotel it should be noted, is not the holiest site for Jews. It is, in fact, Har Habayit where the Temples of old once stood. This simple fact needs to be stressed because, thanks to years of disinformation and lies, it has somehow morphed into an Islamic shrine where Jews are forbidden to tread.

Itamar Ben Gvir visited this holy site for 15 minutes. Note this very salient fact; his entire presence there took no longer than one-quarter of an hour. During that brief period, he neither overtly uttered any inciting slogans nor did he trespass on forbidden territory.

Never has a fifteen-minute pilgrimage elicited such vicious, venomous and vile reactions with convulsions emanating from local breast beaters and international hypocrites alike.

What are the crimes which warranted the wrath of the world to descend like fire and brimstone on his head and collective condemnations to be launched?

First and foremost, it is the crime of a Jew wishing to pray at Judaism’s holiest site. The Minister’s visit was meant to highlight the racist existing situation whereby Jews and Jews alone are forbidden from praying on the mount where the Temples once stood. This disgusting situation, described by all and sundry as the “status quo,” is no longer acceptable by an increasing number of Jews, nor should it be so. The only people for whom banning Jewish prayers seems normal are left-wing apologists for Islamic violence and the knee-jerk appeasers of the international community.

That explains why expressions of horror have burst forth like volcanic eruptions.

Jews visiting the Temple Mount have, according to all the denunciators, invited chaos, mayhem, riots and dangerous threats to world peace. What none of them has, however, acknowledged is the simple fact that threats of terror and war emanate not from Jews praying peacefully but from the usual Islamic instigators. In their rush to placate and appease the perpetrators of chaos, murder and hate, they conveniently prefer instead to hark back to the age-old ploy of blaming Jews.

The hypocrisy pouring forth is so blatant that no self-respecting Jewish person should remain silent anymore.

Unsurprisingly, at least for anyone with even a slight knowledge of history, even those designated as peace partners, have joined the bash Israel mob. The UAE, an Abrahamic peace member, has submitted together with China an urgent request for the UN Security Council to meet in emergency session. Just imagine the absurdity whereby China which sends it Moslem citizens to “re-education camps” and suppresses religious freedom, is asking the UN to condemn Israel for allowing Jews to visit, let alone pray on Har Habayit. That is lunacy enough, but then we have the US Secretary of State and the US Ambassador to Israel, both nominally Jews, warning us that this is forbidden. The latter lit the menorah at the Kotel on Chanukah, a place claimed to be an Islamic site and part of so-called “occupied territory.” What bold-faced hypocrisy.

Germany has called the visit “a provocation.” Given past episodes, I guess that Jews actually existing would be a provocation.

Chelm was reality compared to the stupidity now prevailing.

As North Korea & Iran thumb their noses at the UN, engage in gross violations of human rights and threaten world peace, the UN convenes in emergency session to condemn Israel.

Two other points need to be clarified.

The media, yet again, has demonstrated its automatic bias. Among others, the UK Guardian and the Sydney Morning Herald have predictably swallowed the prevailing lies issuing forth from Ramallah, Gaza, Tehran and elsewhere. The Guardian referred to the Temple Mount as the Al Aqsa Compound, thereby removing any Jewish connection. The SMH reported that “Israel’s new far-right national security minister visited the Al Aqsa Mosque.” In actual fact, he visited the Temple Mount, not the Mosque. This buys into the lie that “settler” Jews stormed the Mosque, which of course, is a perversion of the truth.

The second point is the reported opposition by Charedi Rabbis and politicians to visiting the Temple Mount because of Halachic reasons. It should be noted that eminent Rabbinical authorities, past and present, have investigated the ramifications of visiting this site and have determined that it is perfectly acceptable as long as designated areas are respected. Increasing numbers of Jews, including Charedim, are doing so, and this is causing those calling for a ban to become even more extreme in their prohibition edicts. Maimonides visited the Temple Mount. Was he a transgressor also?

Another reason given by Charedi opponents is that by visiting this historic site, Jews will “provoke Moslems and others” to cause violence. In 1948 this self-same argument was used to denounce the re-establishment of a Jewish State. This ghetto-type cowering in the face of Jew hate should no longer be a valid response.

The first week of 2023 has only just occurred, and we already have had major convulsions.

UNRWA commissioner claims the agency is not political. It is nothing BUT political!

Why is it Important to Translate into German the Contents of Palestinian Authority Textbooks Used in UNRWA Schools?